The other day my TV suddenly turned itself on. I turned it off again, but sure enough after about 30 minutes it was on again. It didn’t take long before the TV was unable to start at all. When I pressed the power button, the TV started to click and the red status LED flashed. I suspected that it didn’t get enough power to start. To me this sounded like some kind problem with the power supply, probably a bad capacitor. Sure enough, after opening the TV, I found three capacitors that were in bad shape, and after replacing them with new ones, the TV works perfectly again!

I suspect that this is a quite common problem, and this solution is probably applicable to more models starting with LE40. However, if you have a model that starts with LE40R*, then this solution might not be enough since there is a memory on the logic board that could have been broken when the capacitors failed. Since it is a quick, cheep and quite easy fix, it might at least be worth to open your ”broken” TV to see if it suffers from the same problem as mine. I payed 5$ for the capacitors, and you can probably get them even cheeper on eBay.

This is a pretty simple repair, and you don’t have to have any great soldering skills, but you do need a few tools and of course new capacitors to replace the broken ones with.

Put the TV on a soft surface (like a bed) with the display facing down and remove all screws holding the back together. After all screws have been removed, you should able to lift the back cover right off.

Step 2, look for any bad caps on the power board. 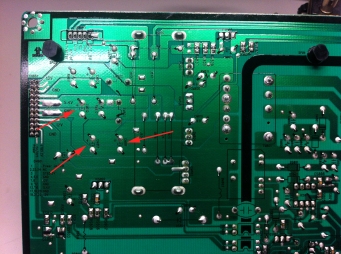 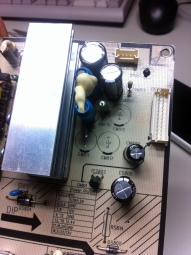 The existing capacitors that broke were 1000uF 10V capacitors. Since they broke, I suspect they were under-dimensioned. There for I replaced them with 1000uF 25V capacitors instead. What is important here is that the capacitor that you use is 1000uF and at least 10V, so anything above 10V is also ok. I would recommend using 1000uF 25V capacitors. I got mine from the local TV-repair shop but you can also easily find them on eBay. 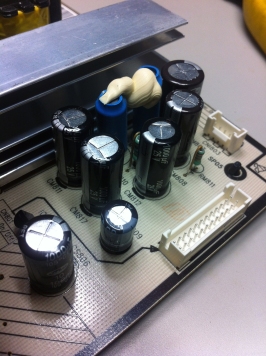 Hopefully you will now have a working TV again.